Given below is brief summary of all these few sacred and renowned temples in and around Ahmednagar city. Today some of these temples are major tourist attractions of Ahmednagar district. 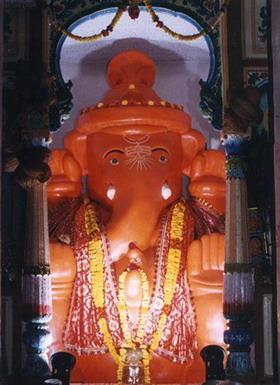 Dedicated to Lord Ganesha, this is unarguably one of the most popular and sacred temples of Ahmednagar city. This 100 year old temple also looks quite beautiful too as most part of the temple has been constructed in pure white marble. The Ganesha idol enshrined in this temple is also quite unique and distinct in itself, which not only calms but also charms its devotees.

The Ganesha idol clad in red color is sitting in a blessing posture and has a Shivalinga coiled by snake originating from navel. Devotees or tourists visiting this temple for the very first time would definitely be captivated and enchanted by distinct features of this Ganesha idol. 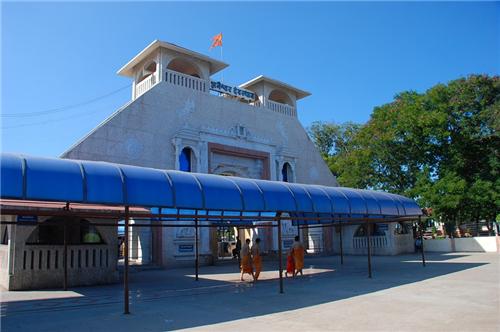 Shani temple located in Shingnapur village, 35 kms away from Ahmednagar city, is another immensely sacred religious destination of Ahmednagar district. As matter of fact not just devotees from in and around Ahmednagar city, but from across India visit this temple. There are many unique features and also legendary stories attached to this temple that has made it so famous. One really unique thing is that there is no idol inside this temple, but a huge black stone erected on a beautiful platform. This black stone is indeed the main deity of this village. But, this huge black stone is no ordinary stone. Locals here believe that this black stone has divine power that protects the entire village from any kind of evil. As matter of fact Shingnapur is probably the only village in the entire world where none of the house has a door. Since people here have completely entrusted their faiths in Shani Maharaj, personified in black stone, to protect their homes from any kind of theft and wrong doing. 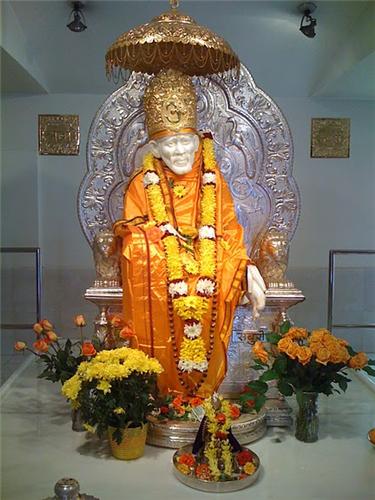 This temple needs no introduction at all. This is one of the immensely popular temples of India. And since it is located in the proximity of Ahmednagar city (merely 80 kms away from Ahmednagar), people of Ahmednagar share even more special bond. Every day thousands of devotees from Ahmednagar cutting across different religions and castes flock to the doorsteps of Shirdi Sai Baba to seek his blessings.

People who still don’t know who Shirdi Sai Baba was, he was a famous saint from Shirdi and was widely considered as reincarnation of god by Hindus and Muslims alike. This famous temple dedicated to Shirdi Sai Baba, as the name suggests, is located in Shirdi itself.

Located just 3 kms away from Ahmednagar Railway Station in small town of Kedgaon, the famous Renuka temple is dedicated to Goddesses Durga – the most popular incarnation of Devi. Although exact history of this famous temple is still a mystery, it is still one of the few among many temples of Ahmednagar that enjoys immense adulation and respect among the locals. Being a Goddesses Durga temple, the Navaratri festival is obviously celebrated with lots of fervor. During 9 day Navaratri festival thousands of devotees from all around Ahmednagar throng this temple to seek the blessings of Durga maa. 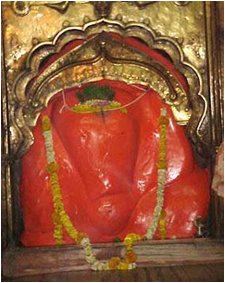 Although located more than 100 kms away from Ahmednagar city in small Siddhatek town, this temple still has a very special place for people of Ahmednagar. As it is one of the 8 auspicious Ganesha temples of Maharashtra state. Hence, not surprisingly die hard Ganesha devotees residing in Ahmednagar city travel all the way to Siddhatek town to get the darshan of their beloved Lord Ganesha.

Located in Parner Taluka, some 40 kms away from Ahmednagar city, is a beautiful Siddheshwar Temple. What makes this temple beautiful is not the grand architecture, but its natural scenic setting. As this temple is set in the midst of small pounds and even a large waterfall is located near the temple.

This is another very respected temple in the devotional world of Ahmednagar district. It is dedicated to Goddess Shri Kulswamani Jagadambadevi Mohata Devi and is fondly known as Mohata Devi among the locals. Locals consider Mohata Devi as mother of the whole world and seek spiritual blessings from her for their day to day life. This temple is located in Pathardi town, some 50 kms away from Ahmednagar city.