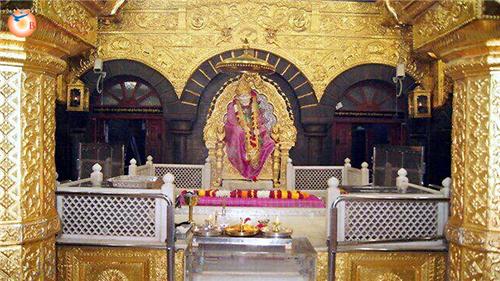 People of Ahmednagar feel very proud and privileged that they reside in the proximity of some of the most sacred religious temples of this country, the famous Shirdi Sai Baba Temple, which is located in a small town of Shirdi, some 85 kms away from Ahmednagar city. While there are many Sai Baba temples across the country, but the Sai Baba Temple in Shirdi is considered the most auspicious one by all Sai Baba devotees. As it was in the small town of Shirdi that Sai Baba had lived all through his life and spread his universal teachings of love and harmony. Today his spiritual aura still lingers in Shirdi town and more so in this humongous temple complex where his huge size idol and samadhi resides.

Today people of Ahmednagar district indeed feel very blessed that such a great soul had lived and died in their region. However, over the decades the spiritual aura of Shirdi Sai Baba Temple has crossed all the regional and national boundaries. As today the temple is not only visited by devotees from Ahmednagar district or India, but also by devotees living outside India. On any given day approximately 20,000 devotees visit the Shirdi Sai Baba Temple and on auspicious religious days the number of devotees zooms to over 1 lakh.

And as for Shirdi Sai Baba Temple Complex itself is concerned, it is obviously very beautiful and huge. The entire temple complex is spread across 200 sq. mtrs. It consists of main samadhi temple and other places where Sai Baba had spent considerably important time during his lifetime.

Below is complete information and detail of Sai Baba Temple Complex


Overall, the Sai Baba Temple Complex is indeed like a spiritual world where the aura of Sai Baba exudes even to this day and hence lends immense peace & harmony to his devotees.

For further information on size of rooms and rent, please click here

Besides, there are 5 trains from Ahmednagar to Shirdi Sai Nagar Station. Out of which 51033/Mumbai CST – Sainagar Shirdi fast passenger train runs on daily basis. The names of other four trains are as follows: