Located merely 34 kms away from Ahmednagar city in Shingnapur town, Shani Temple is one of the really unique and exceptional temples of India. As the temple itself came into being under very extra ordinary circumstances and even some of the unique features attached to this temple are not found in any other renowned temples of India. Dedicated to Lord Shani (Saturn, one of the 9 planets in our solar system), the first unique thing about this temple is that Shani is not personified by a god deity here, but a huge black stone erected on an open air platform. But, what is really even more unique is how this black stone arrived in the Shingnapur village and the tremendous faith that villagers have on this black stone. 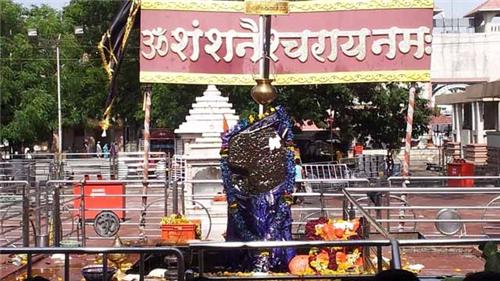 There are indeed many legendary and mysterious stories about how did this divine black stone arrived in the village. But, the most popular story is that some 300 years ago a huge flood had brought this black stone to the village. This black stone soon acquired a divine status among the local villagers when it miraculously started bleeding after a shepherd hit it with a rod. On the same night Lord Shani appeared in the dream of a villager, who was believed to be a sincere devotee of Lord Shani. Lord Shani is believed to have told the devotee that the black stone is actually the form (swayambhu) of him and a temple should be built exactly at the same place where the black stone was found. Lord Shani has even believed to have instructed the devotee that no roof should be built over his swayambhu. Since for Shani (saturn) the entire sky is his home and hence the black stone stands on an open air platform.

However, the most astonishing and unique thing is the tremendous faith that the local villagers have reposed on the Shani temple. Their tremendous faith is reflected in the fact that none of the house, huts and shops located within 1 km radius of Shani temple has a door. People here believe that Lord Shani will protect them and their properties against any theft. As matter of fact Shingnapur village enjoys near zero crime rate and this miracle is credited to Lord Shani himself. But, what is even more astonishing is that even local banks located in the vicinity of Shani temple don’t have lockers.

Shingnapur is probably the only village in entire India and even in the world that reposes such deep faith on its local temple. This makes Shani temple truly one of its kind in entire India. And even the temple itself is beautiful and is also huge too. Over many decades locals as well as far across devotees denoted huge donations which has helped this famous temple to become so grand and beautiful t. But, the main attraction obviously remains the huge black stone erected on a beautiful open air platform. The sight is absolutely beautiful and captivating to say the least. Devotees will also find small deities of Lord Shiva, Hanuman and Nandi bull on the vicinity of open air platform, which only makes the sight even more beautiful.

On any given day, nearly 30,000 to 40,000 devotees visit the Shani Temple. This number swells up to lakhs on amavasya (the new moon day), as it is believed to be the most auspicious day to appease Lord Shani. Due to the fact that the temple is always overwhelmed and overcrowded by devotees, proper administrative and security arrangements are made here to ensure that devotees get the Lord Shani’s Darshan without any hassle and problem.