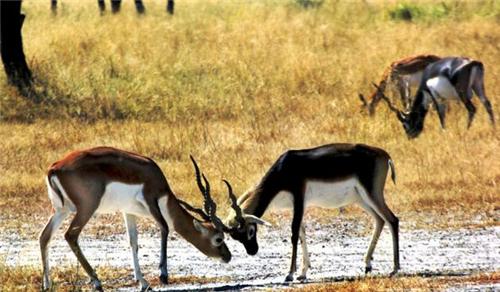 Located at some 80 kms away from Ahmednagar city in Karjat Taluka is a small village called Rehkuri. This small village, which otherwise is not known for any special features and tourist destinations, is actually home to the sanctuary of rare and famous animal ‘Indian Black Bucks’. The sanctuary is known by the name Rehkuri Black Buck Sanctuary and is one of the two wildlife sanctuaries located in entire Ahmednagar district.

Although this sanctuary is not amongst the most sought after wildlife sanctuaries of India, but the beautiful looking Indian Black Bucks that are preserved here are amongst the few places in entire India where they can be spotted in huge numbers. And purely for this reason every year this sanctuary is visited by thousands of wildlife enthusiasts not just from Ahmednagar district, but also from across Maharashtra state.

The entire Rehkuri Black Buck Sanctuary is spread across 2.17 Sq. Kms of land area and it is estimated that as of today there are some 400 to 500 Indian Black Bucks inside this sanctuary. The best time to visit this sanctuary is during summer season, as during this season chances of spotting black bucks in huge number is very, very high. However, it is important to bring to notice that this sanctuary is open round the year and is not closed during any particular season.

Rehkuri Black Buck Sanctuary does have forest guest rooms, which are pretty decent and are laced with all the standard facilities. The prices/rent of these guest rooms is pretty affordable. You also have the option of building a tent near the guest room, but for that obviously you’ve to take special permission from the forest officials. However, there are also readymade tent services inside the sanctuary.

Incase if you don’t want to stay in the sanctuary, then you can choose to stay in Karjat, a small town located in the very proximity of this sanctuary. It is a fairly developed town and hence does have accommodation services like guesthouses and lodges.

From Ahmednagar there are regular trains for Karjat and Daund and also many S.T buses to small towns  and villages adjoining to Rehkuri Village.