Meherabad is today one the most famous pilgrimage centers of Ahmednagar city. Located around 9 kilometres in the south of Ahmednagar city, Meherabad is home to Samadhi (tomb shrine) of famous spiritual saint Meher Baba, after whom the small town Meherabad has been named. For people of Ahmednagar, Meher Baba was one of the greatest souls to have walked on the planet Earth. Born as Merwan Sheriar Irani in 1894 in the city of Pune, Meher Baba dedicated his entire life to spiritual enlightenment and social service. 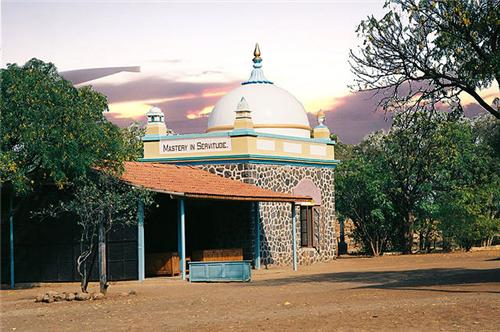 Meher Baba’s special bond with Ahmednagar and its people began in 1923, when Meher Baba along with his few disciples shifted from Mumbai to a small place in Ahmednagar city. Meher Baba later named this place as Meherabad and made it the main center for all his spiritual and social service activities. Meherabad was, however, more than a mere home or a service center for Meher Baba, it was his beloved spiritual oasis. As this place had inspired and deeply intensified his spiritually quest and eventually helped him realize his final goal of becoming a spiritually awakened person. In fact such was Meher Baba’s deep bond with Meherabad that his last wish was that his body must be cremated and his Samadhi must be built at this very place after his death. A wish that was obviously fulfilled by his sincere devotees after Meher Baba left this world on 31st January 1969.

Today the Samadhi of Meher Baba located on Meherabad Hill draws thousands of Meher Baba’s devotees not just from Ahmednagar but from far across the world. One unique thing about this sacred Samadhi, which is worth mentioning, is that the dome structure under which it is laid was completed in 1938 itself, i.e. more than 30 years before Meher Baba’s death. This is because Meher Baba had decided his place of Samadhi during his lifetime itself and hence its construction had begun much before his death.

In the proximity of this sacred Samadhi are many buildings including a museum and library that have stored many of Meher Baba’s artifacts and books. The museum and building, needless to say, are kept completely open for visiting devotees. But, the place that prospective visiting devotees must surely visit is a small and humble house located on the Lower Meherabad, not very far away from the Samadhi. It is at this very small & humble house that Meher Baba spent most part of his life while practicing his forty-four years of silence. This house unarguably played a critical role in Meher Baba’s spiritual quest and hence deserves a visit by his sincere devotees.

Devotees visiting Meher Baba’s Samadhi for the very first time need not at all worry about their accommodation. Being an international and renowned pilgrimage site, there are many accommodation services, which are indeed located in the proximity of the Samadhi site. The most prominent being Meher Pilgrim Retreat, Hostel D and Andhra Rest House.The addresses and contact information’s of all these accommodation services have been mentioned below.