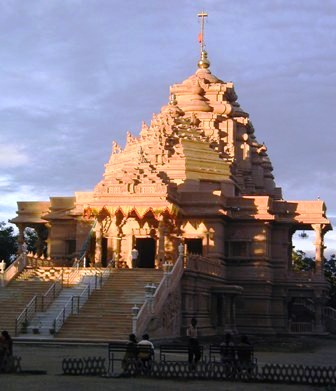 Ahmednagar is a city that is home to huge number of temples and rightly so is called one of the religious centers of Maharashtra state. But, if there is any one temple amongst all that truly stands for its architectural beauty, then it is Lord Dattatreya Temple located on Manmad Road, near to Tarakpur Bus Stand. The official name of the temple is Shri Datta Kshetra Temple.

Although this temple is a very recently constructed temple, but when it comes to sheer architectural beauty, then this temple surely takes the crown from all the existing and historically old temples of Ahmednagar city. What really makes this temple so beautiful is the fact that it has been completely constructed with special pink colored Bansi-Pahadpur stones, which has obviously given a very magnificent look to this temple. These stones were imported specially from Rajasthan state. But true purpose of this temple goes beyond merely offering a view of architectural beauty to its devotees, the true purpose is obviously to offer peace and harmony to its devotees.

And this noble purpose is indeed very easily achieved, as visiting devotees do find immense peace in the spiritual ambience of this spacious temple. So, it is not surprising that this temple in a very less time has become one of the most visited temples of Ahmednagar city. Below are some of the silent features which are very much integral part of this temple.

Before summing up about this temple, a special mention about Shri Ramakrishna Swamiji has to be made. After all, it was thanks to this late and deceased famous saint that a beautiful Dattatreya Temple in the very heart of Ahmednagar city has become a living reality. It was his much cherished dream to have a temple dedicated to Lord Dattatreya in the very heart of Ahmednagar city, a dream that was eventually fulfilled by his adherent followers after his death in 1999.

Lord Dattatreya Temple is located very near to Tarakpur Bus Stand, which is one of the prominent S.T bus stands of Ahmednagar. Another bus stand that is quite close is Old City Bus Stand. However, prefer travelling via Tarakpur Bus Stand route. This is because time taken to travel via this route is comparatively very less. Complete address and contact information of the temple has been given below.