Simple cloths and simple food is what actually constitute the lifestyle quotient of Ahmednagar city. Here lifestyle only means simplicity and nothing else. This is so because people of Ahmednagar city are even today deeply rooted in rural ethos and values. Yes, one may argue that urbanization fad has caught up with Ahmednagar’s young population, which is clearly visible in their preference for western attires like jeans, T shirt etc.

People of Ahmednagar, however, are still too simple to exhibit the kind of glitz and glamour that one witnesses in big metro cities like Mumbai and Delhi. But, this doesn’t in anyways means that there are less boutiques and garment retail shops in Ahmednagar. There are hordes of them. In fact Ahmednagar’s famous Kapad Bazaar is completely dedicated to selling garments and cloths. 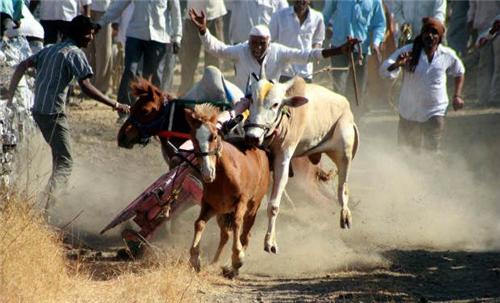 Cattle races are very famous in the rural regions of Ahmednagar district
And when it also comes to food, as mentioned earlier, the taste and preferences are very simple. With the major liking of course for Maharashtrian cuisines. Chapati, Bhakri, Rice, Dal and hordes of Maharashtrian Bhajis make up the basic and daily staple of Ahmednagar people. There is very minimal presence of multi cuisine and inter-continental restaurants in this part of the world. Equally there is very less presence of lifestyle clubs and gyms in the city.

Overall, it is apt to say that city of Ahmednagar is still deeply rooted in rural ethos and values and hence lifestyle of people here is still very simple and conservative.