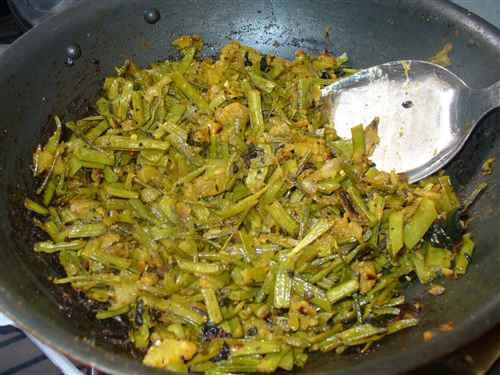 Chapati, Bhakri and Bhaji along with rice & dal/amti are pretty much the basic staple of most Ahmednagar people. Bhakri, which is losing popularity in neighboring cities like Mumbai and Pune, is still very much popular in this part of the world. Among Bhaji’s, all traditional Maharashtrian Bhajis like Batata ani Flower cha Rassa, Batata chi Bhaji, Vaangi chi Bhaji, Chavalichi bhaji, Bhindi chi Bhaji etc are cooked almost everyday in Ahmednagar households.

One very distinct thing about Ahmednagar food is that it exudes with earthly fragrance; as if it is freshly brought from nearby farm land. This is equally true about all the small cities and town located in rural Maharashtra, which obviously makes the food very delicious.

Non vegetarian food and cuisine are equally very important part of the basic staple of Ahmednagar people. The inception of non vegetarian cuisines in Ahmednagar region really began with the beginning of many Muslim dynastic reigns. Chicken Biryani, Mutton Biryani, Chicken Masala, Kabab and many other non veg dishes, which flourished during medieval era, is relished even today by Ahmednagar people with great pleasure. Besides, special non vegetarian restaurants are available across the city.

Ahmednagar also has a pretty vibrant street food culture. All the popular Maharashtrian fast foods like Vada Pav, Batata Bhaji¸ Kanda Bhaji and Misal Pav are sold here by hordes of street vendors. However, here one will rarely find Pani Puri & Bhel Puri stall here. As for, which fast food is the basic staple of Ahmednagar people, then Kanda Poha and Upma are widely cooked breakfast items in Ahmednagar household.

Everyone loves sweet dishes and Ahmednagar people are of course no exception. Puran Poli & Sheera – typical Maharashtra sweet dishes – are equally popular in this part of the world. They are mainly cooked during auspicious festivals like Holi and Diwali. Modak, which is cooked mainly during Ganesh Chaturthi, is another very popular sweet dish here. Besides, sweet dishes like Shrikhand and Gajar ka Halwa are equally popular here.