Ahmednagar’s rich culture in a way reflects India’s splendid diversity. In fact people of Ahmednagar can very well claim that their rich and colorful culture is a very humble tribute to India’s evergreen diversity. Since at this historical city people of different religions languages and cultures have harmoniously lived together for thousands of years and are peacefully co-existing even today.
Here is a brief look at all the religions, languages, costumes and other important cultural aspects of Ahmednagar.

While Hindus definitely make up the majority of Ahmednagar’s bulk population, but Muslims also have a huge presence in this city. In fact Islam is the largest minority religion followed by Christians and Sikhs. Temples, mosques and churches are also obviously present in huge numbers all throughout the city.

It is, however, important to bring to notice that there are few religious destinations in and around Ahmednagar which are visited by devotees cutting across different religions and faith. This includes the famous Shirdi Sai Baba Temple and Samadhi of Meher Baba. This only vindicates Ahmednagar’s rich history of religious harmony and peaceful co-existence.

Marathi is obviously the largest spoken language, followed by Hindi. Even English language is slowly gaining prominence in Ahmednagar. This is very well reflected by few English speaking classes operating in Ahmednagar city. However, as of today English is spoken and understood by very niche population in Ahmednagar.

Ahmednagar society embracing modern culture and values is best reflected in its people’s growing preference for western costumes and attires. This is mainly true of younger generation who like to dress up in jeans, trousers and T shirts. Even young and college girls have begun to adapt themselves to western attires. However, majority of girls of Ahmednagar even today prefer wearing traditional Salwar Kameez. Besides, traditional & conservative attires like Kurta pajama, Dhoti and Saree is still a preferred costume of majority of elder and older people of Ahmednagar. 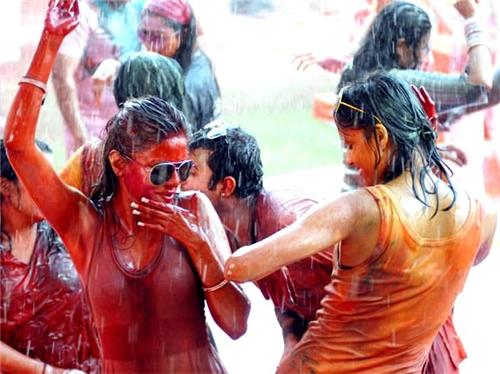 Being home to many faiths and religions Ahmednagar obvious comes on its during important religious festivals. Dilwali, Holi, EID and even Christmas is celebrated with immense fervor. But the most popular festival here is Ganesh Chaturthi. Every year people of Ahmednagar wait for Ganesh festival with bated breath. The famous Vishal Ganpati temple of Ahmednagar is fully decorated and is thronged by thousands of Ganesha devotees during Ganesh Chaturthi festival.