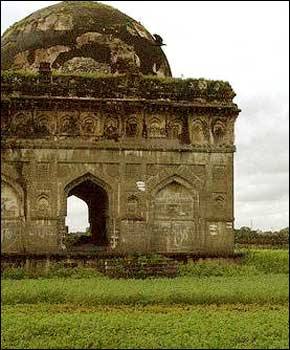 One might very well like to overlook the black stone monuments at Bagh Rauza, as they today stand in a very deplorable and ruined condition. But inside this very deplorable monument reside the tomb of a man who was actually the founder of Ahmednagar city. The man was Ahmed Nizam Shah, the founder of Nizam Shahi Dynasty and the also the one who laid the foundation of Ahmednagar city as we know it today. As matter a fact the name ‘Ahmednagar’ itself is partly derived from the name Ahmed Nizam Shah.

With Ahmed Nizam Shah playing such an important role in the history of Ahmednagar city, his tomb obviously assumes a huge prominence. Although condition of the monument under which his tomb is located – as mentioned earlier – is in very deplorable condition, but nothing at all can take away the historical value of the place. As visiting this tomb is indeed like visiting the very roots of Ahmednagar city. Since Ahmed Nizam Shah was the very man who made possible the dream of building a city that we today know by the name of Ahmednagar.

As for physical features of Bagh Rauza is concerned. Bagh Rauza is actually a small complex where apart from the tomb of Ahmed Nizam Shah, tombs of many other important personalities are located. These personalities were actually very near and dear to Ahmed Nizam Shah. Each of the tomb is shielded and sheltered under a dome structure, which are built in typical Mughal and Persian architecture. But, obviously the dome structure under which the shrine of Nizam Ahmed Shah resides is the most grand and stand out structure amongst all.

Other tombs in the vicinity of Bagh Rauza are of Shah Tahir and Ghulam Ali. Shah Tahir was one of the ministers of Nizam shah. But, it is the tomb of Ghulam Ali that should attract your attention. Ghulam Ali was actually a royal elephant who died in one of the wars.

Overall, Bagh Rauza may not offer any historical grandeur or beauty, but its historical value is too priceless and hence this place surely deserves a visit.